Taking the Next Step

We worked on a large scale project for a water and wastewater operator with 7 treatment plants and 139 pumping, monitoring or storage sites. When we entered the project, the infrastructure was automated but compartmentalised.  As a result, it was impossible to get a consolidated view of the state of the infrastructure.  In the past, several failures had gone undetected as alarming was confined to a specific site. Obviously, this was not an acceptable operational situation. This setup has meant they were not able to respond adequately to critical situations.

That is where our Controlweb came in to implement an efficient centralised system. Wonderware ArchestrA was selected as the SCADA solution, offering centralisation, native redundancy and effective standardisation of the system. The first challenge was to implement a full and standardised SCADA layer over an existing and organically developed control infrastructure. A further challenge was the reliability of communications. The system’s architecture needed to deliver resilience in an environment where communications were expected to drop out.

This project was not without its challenges. Each of the sites involved ranged in size, function and IO tag counts They varied from around 20 on the smallest sites to over 1000 on the larger sites. There were also a variety of different hardwares performing the control functions, including Remote Terminal Units and Programmable Logic Controllers.

It meant that we had to present each of the individual components to the system in a consistent fashion, despite their differences. This added an extra layer of complexity as most projects would have consistency built all the way through the control architecture. That was a luxury we just did not have.  A simplified view of the ultimate architecture is shown in diagram below. 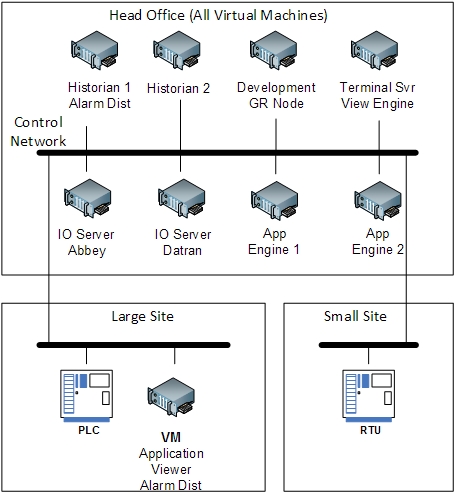 Two important features of the architecture are:

We focused on 3 key aspects of functionality:

Despite the challenges on this project, we were able to implement an efficient and resilient standardised system across all 139 sites. There is now no chance that faults will go undetected and issues can be corrected from a centralised location. Failure in communication is no longer expected! Our clients were more than impressed with the end result.